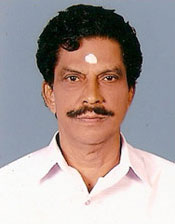 This award is constituted by the Thrissur Pooram Ekopana Samithy in commemoration of its founder Secretary late K.R.C. Menon (Korappath Kalappurakkal Ramachandran Menon) who passed away on 2nd July 2008.

Most of the participant Poorams of Trichur Pooram Festival had become just functional, name sake or non-participating in course of time due to various reasons and half hearted co-operation extended to them. To revamp the Thrissur Pooram Festival to its glorious old pomp and show K.R.C. Menon conceived and developed the idea of a common platform to all poorams of Thrissur Pooram Festival. Thrissur Pooram Ekopana Samithy was formed in the year 1988 to champion this noble cause. Financial constrains were the principal reason for the decline, if not the fall of Poorams, in general. Over a period of time, it became nearly impossible for the participating Poorams to mobilise funds, partially because these temples are 5 to 10 kilometers away from Thrissur City where the pooram is conducted. . . It is also worth mentioning here the yeoman service rendered by Late M.K.S. Ezhuthassan as the founder President of the Samithy

During his stewardship as the President of this association, K.R.C. Menon tapped various sources/avenues to revamp the ailing as well as extinct poorams almost single handedly. The long legal battle with "Thrissur Pooram Exhibition Committee" was contested with conviction, commitment and zeal by K.R.C. Menon. However, the case was lost due to lack of funds and inept handling of the court case in its final stages. The alottement of Rs.10 Lakhs to the Thrissur Pooram Ekopana Samithy by The Kerala Tourism Department (B) was another towering achievement of the initiatives of K.R.C. Menon. The Central Tourism Department is also considering some grant to Thrissur Pooram Festival which is another feather in the modest cap of K.R.C.Menon's President ship.

The present scenario of the Panamukkumppilly Pooram which ceased for the last 80 years, the nearly extinct Kanimangalam and Laloor Poorams, and the amazing and vibrant performance of other constituent Poorams are befitting tributes to Late K.R.C. Menon. While leaving to his heavenly abode, K.R.C. Menon leaves behind his dream of reinstating the "Kovilakathu Pooram" - the traditional curtain raiser to Thrissur pooram conducted two days before the pooram day -which will be hopefully materialized in the near future with the active participation of The Cochin Devasom Board.

All said and done the single handed pursuit of Late K.R.C. Menon followed against tremendous opposition and drawbacks gives us enormous courage and enthusiasm to continue his good work and to achieve results in hopeless situations existed, though he remains a unsung hero.

AWARDEE OF K.R.C. MENON MEMORIAL AWARD Sri M.K.Ramanezhuthassan was the office bearer of "Choorakottukavu Pooram" for more than two decades and the Treasurer of Thrissur Pooram Ekopana Samithy for a decade. The award is presented to Sree Ramanechuthassan as a token of profound appreciation for his outstanding contributions to a noble cause.

Sakthan Thampuran wanted to strengthen his state and unity of the people. At that time temples were under the control of Yogadiripad as part of his policy of integration, and for harmony amongst people and to discontinue the institution of Yogadiripad (the religious Head) of the major temples of Thrissur and part of tripping the power of Brahmins clergy in all the temples, it will taken over by the state. That was the end of the Brahmaswam and the Devaswom (state) started ruling temples.

Cochin Devaswom Board directly administers 406 temples spread whole over on old Cochin State. Administration is vested with a board consisting of 3 members. This is an autonomous body acting independently. The six pooram festival celebrating temples runs under direct administrations i.e. 1) Pookkattikara-karamukku 2) Laloorkavu 3) Ayyantholekavu 4) Naithalakavu 5) Choorakkottukavu 6) Chembukavu. The other 4 temples Kanimangalam, Panamukkampilly, Paramekkavu and Thiruvambady are controlled under Cochin Devaswom Board.