Natya sastra: All temple arts are based on Bharthamuni's Natya Sastra written around 200 B.C. Natya Sastra is a comprehensive book on arts and its science. The book starts with the origin of "Drama". The format of Play writing with minute details of semantics, morphology, dialects and their phonology are dealt in length. Acting (or dancing) with in-depth knowledge of 9 emotions, 8 moods, proper dress codes, makeup, production, rehearsal and even criticism are discussed in this treatise. The 28th chapter is dedicated to Music only. This authentic script on art is yet to be surpassed globally. 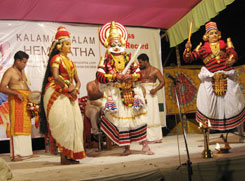 Koodiyattom is a Sanskrit Drama with Regional idioms. This 1400 plus years old temple art is supposed to be the fore runner of dramatic arts of India. Koodiyattom literally means combined acting and is performed in place called Koothambalam, a temple theater exclusively designed to perform such arts. There was a dramatic change in the history of this medieval art when it came out of Koothambalams and was performed in open air. Normally performed by Chakyiar community of kerala till 1950’s, Koodiyattom was opened to all through the courses offered by Kerala kalamandalam, a deemed university in Thrissur.

The main actor in Koodiyattom will be the Chakyiar and female roles are normally done by Nambiar women known as Nagiyar. Nambiar men will play Mizhavu, the main musical instrument which is a copper drum placed in a wodden frame, mizhavara. Other instruments used are kuzhithalam (a type of cymbal), Edakka (drum instrument with soft percussions), kurumkuzhal (wind instrument) and Sankhu (conch – another wind instrument). 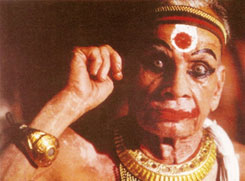 The play will start with few solo notes in Mizhavu as actors pray behind the curtain for the blessings of the god in front of kalivilakku. Koodiyattom may last for several continuous nights going through minute details of text. Off late a monotone running commentary was added to the show in vernacular. This is a modification with the addition of a new character Vidooshaka (the court jester/wise man), a solitary role and his role may extent for long.

Facial makeup, costumes and ornaments used in Koodiyattom are more or less similar to those used in Kathakali. No special vocalist is involved in Koodiyattom. The actors – both male and female- recite Sanskrit slokas according to text of the drama, like chanting Vedic Hymens. The signs and gestures, the movements and facial expressions are codified centuries ago following Natyasastra by Bharthamuni". The performers consider the presentation as a visual yagna. It is thrilling experience to watch maestro’s like Guru Mani Madhava Chakyiar performing Ekalochanam",a facial expression, with no parallel, in acting Ekalochanam", Have a close up photograph of this expression, vertically cut it in to two and feel the difference. One part will show Hasyam(ridicule, humor), while the other half of the face will show Roudram (anger, wrath). Bharat Premiji, Stage & Cine artist, was another master in this intricate and precise act.

"Manthrankam" one of the rarest and most complex plays in koodiyattam repertoire, with its complex and often hilarious web of plots and sub plots, intrigues, stories of love-born kings, conspiring rivals and convincing ministers is a vastly entertaining play. Told almost entirely in Malayalam, it promises to engage even there who find koodiyattom otherwise dense.

The outline of the story is that Udayana the King of Kaushambi, is being held captive by Mahasena, the ruler of Ujjain. Mahasena is keen that his daughter Vasavadutta weds his prisoner. Udayana, however has very wily ministers who compare to free their king using mantras. Endborn scope for word play “Mantrankam” is perform over 41 nights, offered as a ritual performance in Perurvanam Maha deva temple Cherpu, Thrissur.


Few years back UNESCO has recognized Koodiyattom – a classical theatre form, as an oral and intangible heritage of Kerala.

Ashtapadiyattam: This unique theatrical art has played a major role the evolution of medieval temple art forms in Kerala.Ashtapadiyattam is based on renowned lyrical play, Gita Govindam of Jayadeva, compiled around 12 AD, which describes the relationship between Sree Krishna and the gopikas (female cow herds) of vridavanam. The text is dived into 12 chapters and 2 sub-divisions called Prabhandas. Prabhandas contain couplets called Ashtapadas. Main characters are Sree Krishna , Radha and other three gopikas .It is a three day play as formatted by Edappully Ramavarman Thirumulppadu. Sreekrishna desert Radha to deprive her ego .First day " Radha viraham" second day" Radha Sandesham " and finally "Radha Sangamam"The recital also elaborates the eight moods and nine emotions of Heroine Radha, the Ashta nayika in its verses. The portrayal of this concept "Ashta nayika" is the inspiration to many compositions and choreographic works in Indian classical dances

Few dedicated artists from Thrissur have rejuvenated this art form recently with a mix of mohiniyattom, bharathanatyam and kathakali make- up and dress code .Two hour drama is influenced by ballets and uses more instruments viz violin, mridhangam, flute and veena. The poet Jayadeva and his wife Padmavathy appears in this version. The experiment is yet to prove its merit. 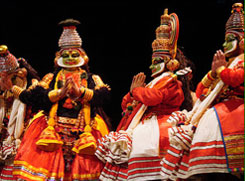 Krishnattam: This enchanting dance drama was created as votive offering to Lord Krishna. Krishnattam is a masterly blend of classical and indigenous art styles, based on lord Krishna’s life presented in eight episodes performed during eight consecutive nights. The poetic text of this dance drama is based on "Krishna Geethi" composed by Manevendra Raja, Samoothri of Calicut in 1654 AD. The sweetness of Geetha Govindam, the sublime philosophy of Srimad Bhagavadam, devotion of Narayaneeyam are well combined in this cosmic play. Krishnattam draws inspiration from a dasrhan of Lord Krishna with the help of Vilwamangalam Swamiyar.

Colorful gorgeous costumes and head dresses, intricate facial make up, narration in sopanam style makes Krishnattam an unforgettable experience. More importance is given to "nritta" (pure dance) that too in group. The act "Mullapoochuttuga" in "avatharam" and "Rasakrida" is the cream of Krishnattam and is unparallel. 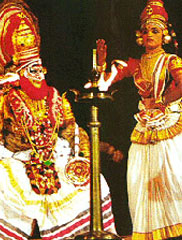 Ramanattam: is the dance-drama based on the life of Lord Rama. As per legend, Ramanattam originated from the rivalry between two Kings. When the Raja of Kottarkkara, a southern Kerala king, requested an audition of Krishnattam at his palace, Samoothiri of Calicut rejected it saying that the southerners are yet to be matured. Humiliated, kottarakara king formulated "Ramanattam" in line with "Krishnattam". It is also a serial enactment of eight nights. The notable difference was that the text is in Malayalam and an enchanting facial make was developed discarding the earlier mask. Hand gestures and bhavabhiniya are the highlights of Ramanattam. Ramanattam played the major role in the evolution of "Kathakali".

During the natural evolution from Koodiyattam to Kathakali, "Koothu" and "Thullal" was popularized as supplementary/complimentary to these temple arts. 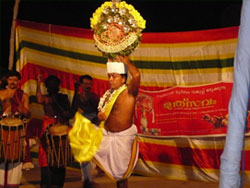 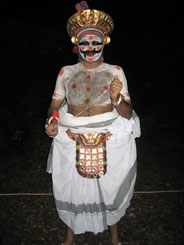 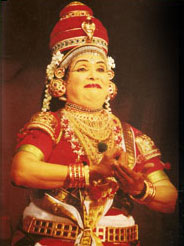 Koothu: is a classical art form known popularly known as "Chakyar Koothu / Nangiyar koothu" depending on the gender of the performing artist. Koothu is a solo dance accompanied by a Nambiar beating a Mizhavu and Nagiyar woman on cymbals exactly like in "Koodiyattam" and is definitely within the frame work of "Thandava" dance style of "Natyasastra". Narrating in Sanskrit first and then explaining in Malayalam, the actor has got ample opportunity to criticize / comment on various contemporary issues. Serpentine type head gear in Koothu represents Anantha, the legendary serpent with one thousand heads and that many tongues. Double edged black mustache and sandal paste all over the upper body with red lines, are notable factors of makeup in Koothu.

In Nangiyar koothu Nambiar women uses elaborate makeup, lots of ornaments and a head cap with a small serpent. "Sree Krishna charitham" (epic of Lord Krishna) is the main text for Nagiyar koothu. 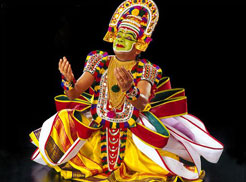 Thullal: Thullal is classified in to three namely Ottan, Seethankan and Parayan of which Ottanthullal is more popular.

Known as poor man’s Kathakali, Ottanthullal is very satirical in nature. Kunjan Nambiar, a malayalam poet, who was on Mizhavu during a "Koodiyattom" play, dozed off during performance and was ridiculed by Chakyar. The very next day Nambiar chartered this act thullal, outside the temple as a protest. During the course of time "thullal" became a perfect solo dance/drama. Dance songs are in simple Malayalam. With Gaudy epaulets, gilled crowns, beaded breast plates, colorful skirts and painted faces, Ottanthullal employs elaborate make up. Even though thullal gives importance to dance, very often it turns monotonous due to lack of variety. To compensate the actor add more satire and instant humor. 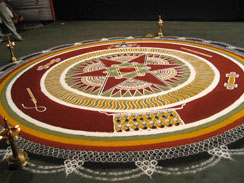 Kalamezhuthu is unique temple ritual aimed to propitiate gods or to exorcise evil spirits. This is an elaborate picturesque powder design drawn either on temporarily sanctified floor or special area reserved for this in temple or *sacred groves* (*kavu*) of Kerala. This colorful ritualistic art is drawn using the following five earth colors, (growth of life in the nature) all prepared from natural products. 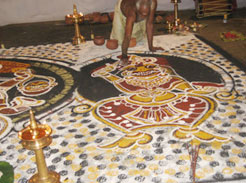 The primary colors green and yellow, and secondary colors of red and black, and the neutral color white represents five fundamental elements. 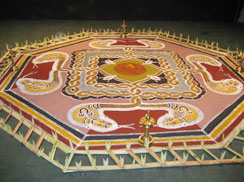 The design on the floor is called "kalam" and the ritual is called "Kalamezhuthu".

The figure and nature of the kalam depend on the purpose of the kalam. Kalams are written as a Geometrical shape (yantra / chakra) or as portrait. They are generally classified into Tantric Kalam & Magic Kalam. Tantric kalams are symbolic representation of the presiding deity. Magic kalams’ representation varies upon the purpose of magic – whether it is white magic, black magic or in between spell. White magic is Votive/ Devotional Kalams, whereas in-between spell is exorcist ritual and Black magic is destructive.

The in-between spell and black magic are inter linked .

The intricate pattern is developed from a central line growing outwards patch by patch. The upper part of the body is drawn in 3 dimensions in some kalam. The most popular forms are *Badrakali-kalam*, *Naga-kalam*, Yakshi-kalam, *gandrava kalam*, *sasta kalam*.

Special mentions should give the varieties of Sarpa-kalam like *Ashta-naga-kalam* (8 intertwined serpents), Karinaga-kalam* (black kalam), *Anjanamani-kalam* (serpent carrying anjanam, a crystal, on its head) and *devi kalam* with 64 hands carrying various armaments and head of Darika drawn for *"Theyyattu"* and *"Mudiyettu"*.

After inviting the deity to the kalam with pooja and paying the offerings, songs praising the deity are recited with thalam. The duration of the ritual may change according to the type and purpose of kalam. Finally the kalam is erased with song and dance. In a *Nagakalam*, the rhythm of instruments with music lifts the psyche of the young girls sitting on the kalam and gradually elates to trance. During the course of the song, the girl, moving in serpentine style, erases the kalam with her long hair (or coconut leaves).

Bhadrakalikalam is drawn to the folk ritualistic theater play " *Mudiyettu*". Here a drama is slowly unveiled around the heroic fight of lord *Badrakali*, the mother goddess, against *Darika*, the demon. Since *Badrakali Kavu* or *Nanadurga temple* under the tree and *Nagathara / Serpakavu*(Naga- the serpent) are the oldest temple worship concepts of Kerala, Kalamezhuthu is centuries old art and architecture.

Some salient features of Kalamezhuthu:

Kalamezhuthu the perfect frame Open air, dark midnight sky, complete silence except the vibrant music from "ishara", gentle breeze, light and shadow from "pantham" ( a torch made out of cloths wound conically over spiral rod on a brass vessel), the flat treatment of Naga-kalam / three dimensional pictures of devi-kalam , the angle of depression.

The spectators may turn psychedelic and may feel that the picture will turn live/personify any moment.